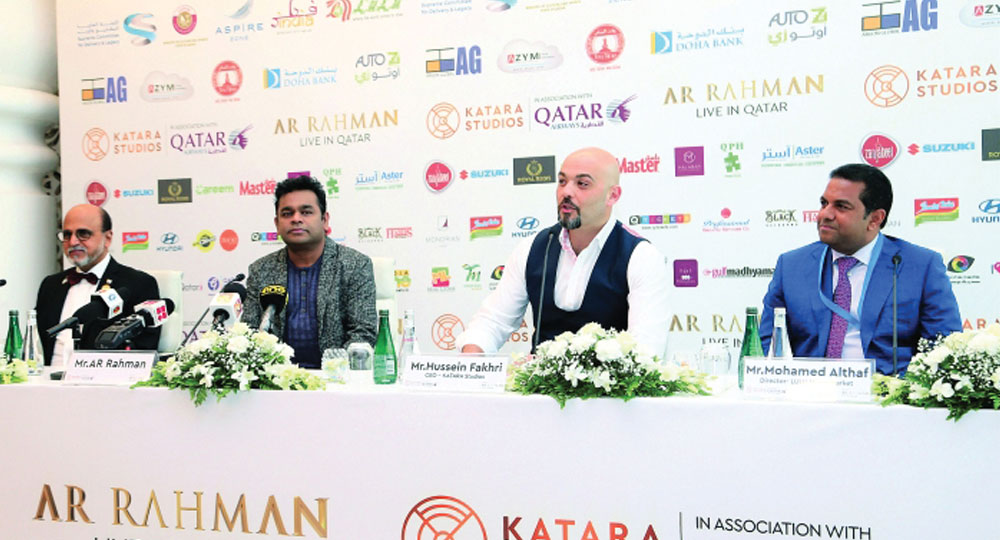 DOHA
GLOBALLY acclaimed Indian musician AR Rahman, who is currently in Doha to perform on Friday at the iconic Khalifa International Stadium, the first FIFA World Cup 2022 stadium, said he would include Arabic songs in his future concerts.
While interacting with the media in Doha on Wednesday, the Oscar winning musician and artiste said he was excited to be in Qatar and was looking forward to performing in front of Qatar’s music lovers.
The concert being held as part of Qatar-India Year of Culture 2019 and dubbed to be one of the biggest musical events ever in Qatar is expected to have an audience of 35,000.
The musical extravaganza will see the Khalifa International Stadium pitch turning into a giant 90-metre-long stage with 80 artistes performing live simultaneously. Large LED screens will be put up around the stage to ensure the entire audience gets a memorable up-close view of the maestro.
Rahman will be joined for the concert by popular Indian playback singer and king of melody Udit Narayan Jha, award-winning singer Shweta Mohan, Carnatic vocalist, playback singer and musician Haricharan Seshadri, A R Rahman’s sisters and popular singers from the South Indian film industry Reihana and Isshrathquadhre, playback singer from the Malayalam film industry Alphons Joseph, Bollywood playback singer Javed Ali, singer and actor Benny Dayal, Indian film score composer Ranjit Barot, Rahman’s troupe singer Dilshad Shabbir Ahmed Shaikh and Indian-born Canadian singer Jonita Gandhi.
The event organised by Katara Studios will be the pinnacle event of Qatar-India Year of Culture 2019, which is intended to promote mutual understanding, recognition and appreciation between the two countries.
The musical fest in Doha is being held in association with Qatar Airways and the Supreme Committee for Delivery and Legacy.
Katara Studios CEO Hussein Fakhri, said, “AR Rahman’s music has transcended all countries and languages and we are very excited to bring him to Qatar for a historic performance. We are sure that it will be one of the most memorable experiences for the audience.”
Welcoming AR Rahman, Group CEO of Doha Bank Dr R Seetharaman said Rahman has globalised Indian music. Regional Director of Lulu Hypermarket Mohammed Althaf said music lovers in Doha are very excited about the concert.
Rahman shot to international fame with his composition for the 2009 Hollywood production
‘Slumdog Millionaire’.